It's a Mata of 'faith in our coach' 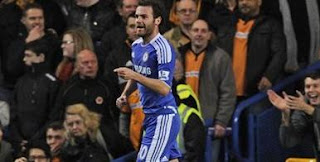 Juan Mata insists the entire Chelsea squad has confidence in Andre Villas-Boas' vision for the club. The Portuguese, who took over from Carlo Ancelotti in the summer, was forced to deny reports last week that some members of the Chelsea squad had become unhappy with his tactics. Recent defeats to QPR, Liverpool, Arsenal and Bayer Leverkusen had left the 34-year-old Blues boss under pressure, but he responded with a comfortable 3-0 win over Wolves at Stamford Bridge on the weekend. Mata was the architect of the midlanders' downfall, setting up John Terry and Daniel Sturridge for the first two goals before adding his own on the stroke of half-time to seal the win.

The Spain international was happy see his team return to winning ways after a difficult run, and rubbished talk of a rift between Villas-Boas and the team. "It's never easy to have such negative results, but we all have a lot of faith in ourselves as a team. We have a lot of faith in our coach and in the quality of the squad," Mata said. "We had a team meeting last week simply to reiterate that we are all together and that we are heading in the same direction and we showed that against Wolves. The group has always been very united, and we have always been sure that the secret in enjoying more success as we go forward, in getting out of this moment, has been to stay strong and stay together."
Email ThisBlogThis!Share to TwitterShare to FacebookShare to Pinterest