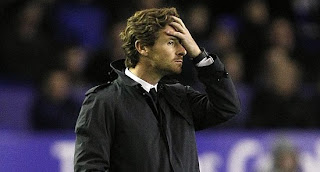 The Chelsea manager was charged by the FA today with "improper conduct" for comments he made about referee Chris Foy after his team's 1-0 defeat at QPR last month. "Chelsea manager Andre Villas-Boas has been charged with improper conduct by the FA, following media comments he made about the match official after his side's match at Queens Park Rangers on 23 October 2011," the Football Association said in a statement. "Villas-Boas has until 4pm on 15 November 2011 to respond to the charge." The Blues boss admitted he was "very aggressive" with Foy after accosting him post-match at Loftus Road, and accused the official who sent off two of his players of failing to treat the teams equally.
Email ThisBlogThis!Share to TwitterShare to FacebookShare to Pinterest