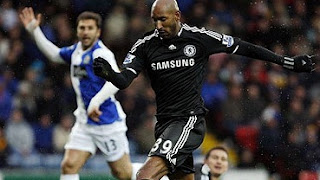 Ewood Park plays host to two sides experiencing very different problems. Blackburn's home games this season have been notable for poor performances on the pitch and vocal protests off it, even if there have been some signs of improvement in their past two outings. Chelsea have been uncharacteristically flimsy as the investigation into their captain John Terry plays out in the media. Terry is nonetheless expected to start against Rovers after watching the 1-1 draw with Genk from the substitutes' bench.


Blackburn Rovers
Steve Kean has no fresh injury worries. Kean is unlikely to make many changes but midfielder David Dunn is back in contention after recovering from a calf injury and Junior Hoilett has recovered after suffering a tightening of his hamstring last weekend. Ryan Nelsen (knee), Michel Salgado (hamstring), Scott Dann (calf) and Vince Grella (hip) are still ruled out.

Chelsea
John Terry looks set to return to the Chelsea side. The Blues and England captain was an unused substitute in Tuesday night's Champions League draw at Genk hours after police launched a formal investigation into allegations he racially abused QPR defender Anton Ferdinand. John Obi Mikel has shaken off a back problem while Hilario (flu) and the suspended Didier Drogba (arm) will return after the international break.

Facts and stats
Nicolas Anelka has scored 12 goals in 16 league Premier League games against Blackburn and five goals in six appearances versus Rovers for Chelsea.

Chelsea have now gone nine league games without a clean sheet, they last went 10 without a shutout in December 1996

Rovers have only won one of their last 14 PL away games, drawing five and losing eight

Blackburn have conceded more fouls (143) than any other Premier League team this term
Email ThisBlogThis!Share to TwitterShare to FacebookShare to Pinterest