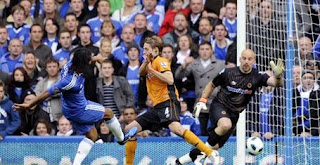 Last year's Premier League runners-up are in need of a positive result against Mick McCarthy's men after back-to-back home defeats as well as a 2-1 away loss to Bayer Leverkusen. While the loss to QPR was hailed as a tactical masterclass by the manager and a spirited performance by the 9 men on the field, the defeat to Arsenal at home was nothing short of shambolic, considering the manner in which the defence self-destructed. Then Liverpool did something that Chelsea sides of the past were well accustomed to – taking all the spoils from a evenly-contested game. Andre Villas-Boas will have plenty to think about in terms of who keeps their place following a poor run of form, but wholesale changes probably won’t occur against Wolves.


There will probably be minor tweaks, with Fernando Torres possibly coming in to replace Didier Drogba ,who scored in the defeat to Bayer Leverkusen, though there could be some young players filling in for tired legs after two long games in one week. Ashley Cole has been passed fit. The England left-back missed Wednesday night's Champions League defeat with an inflamed ankle but has shaken off the problem. Long-term knee injury victim Michael Essien is therefore Chelsea's only absentee.

Wolverhampton Wanderers
For Wolves, Richard Stearman looks set to miss out with a broken wrist, and Ronald Zubar could fill in for his first appearance in nine months, while both Jamie O'Hara and Stephen Hunt are both missing due to suspension. Expect Nenad Milijas and Adlene Guedioura to step in.

Facts and stats
Since their 5-0 thrashing of Genk in October, Chelsea have only won two games, and one of those was after extra time in the League Cup

The Blues haven't lost at home to Wolves since 1979, but the Midlands outfit did pick up a win when the sides last met at Molineux back in January

Wolves have not kept a clean sheet in nine league games, the 0-0 draw against Aston Villa

Wolves have won only one of their last six games, while Chelsea have won three and lost three

Mick McCarthy's visitors have lost their last four away games, conceding nine goals in the process

Wolves are yet to receive a red card this season, whereas Chelsea have seen three players receive their marching orders
Chelsea
Email ThisBlogThis!Share to TwitterShare to FacebookShare to Pinterest