Drogba returns to training ahead of Liverpool clash 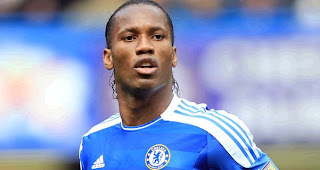 Striker Didier Drogba has returned to training ahead of the visit of Liverpool after undergoing elbow surgery. The Ivorian, who has served a domestic ban following his red card against Queens Park Rangers is available for selection after having a metal plate removed from his elbow. Drogba broke his arm last year prior to the World Cup finals, but played on with a cast as Ivory Coast crashed out of the group stage in South Africa. Despite the form of Daniel Sturridge and signs of Fernando Torres returning to his former self, the return to Drogba will come as a boost to Andre Villas-Boas, with the boss looking to improve on a run of one win in The Blues' last four. The 33-year-old has an impressive goalscoring record against Liverpool, having scored eight goals against The Reds since his move to Chelsea in 2004, including a double in the Champions League semi-final in 2008.
Email ThisBlogThis!Share to TwitterShare to FacebookShare to Pinterest