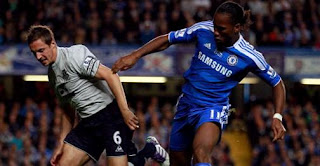 Drogba has been in contract talks with Andre Villas-Boas, and while he said he is happy to fight for his place at Stamford Bridge, the striker has been coy on whether he will agree to the new terms in the deal. Chelsea are still hopeful of signing Drogba, but the 33-year-old wants currently wants a longer contract than what is being offered to him. AC Milan, meanwhile, are reportedly on the lookout for a back-up for Antonio Cassano, who had heart surgery last week after suffering a stroke. While the club could wait until Drogba can leave Chelsea for free next summer, in the interest of challenging for a Champions League spot this season, they are willing to pay up and get the Ivory Coast international on board as quickly as possible.
Email ThisBlogThis!Share to TwitterShare to FacebookShare to Pinterest