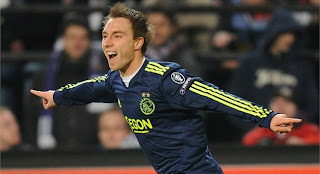 Chelsea are keen on signing 19 year old midfielder Christian Eriksen who is currently playing as an attacking midfielder for Dutch giants Ajax with whom he won the 2010-11 Eredivisie. He joined the AFC Ajax youth academy from Odense Boldklub, and was named 2008 Danish U-17 Talent of the Year. He made his debut for the Danish national team in March 2010, and was the youngest player of the 2010 FIFA World Cup in South Africa. In 2011, he was named Dutch Football Talent of the Year. Legend Johann Cruyff said of the youngster, “He’s a player I really like with all my heart. This prize is just the beginning, a stimulus to get the maximum out of his career. The talent is there, the recognition also; now it is up to the player himself. You can compare him with Brian and Michael Laudrup. Only time will tell if Eriksen can reach the same level as them.”
Email ThisBlogThis!Share to TwitterShare to FacebookShare to Pinterest