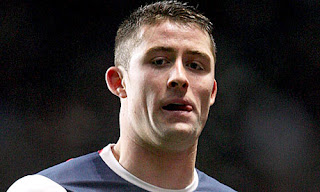 Chelsea have been linked again with a move for defender Gary Cahill. The former Aston Villa centre-half looks sure to leave Bolton Wanderers in the New Year, when he will be down to the final six months of his contract at the Lancashire club. Cahill was heavily linked with both Arsenal and Tottenham Hotspur in the summer, but recent reports have suggested the North London duo have since cooled their interest. However, the 25-year-old could yet end up in the capital, with many reports claiming Andre Villas-Boas is lining up an £8m bid to lure him to Stamford Bridge in January.
Email ThisBlogThis!Share to TwitterShare to FacebookShare to Pinterest