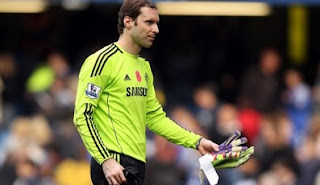 Ewood Park has been a proving ground for Chelsea in the past and Petr Cech said he hoped this Saturday’s fixture away to Blackburn Rovers would be a “turning point” in a campaign that is becoming fraught with familiar difficulties. Already nine points adrift of Premier League leaders Manchester City, Chelsea are acutely aware that they cannot permit that margin to grow. “We cannot afford to drop many more points in the Premier League because we are already behind,” Cech said. "Obviously the sooner we start to cut down the advantage the better it will be for us and the more pressure we will put on them”.

Blackburn is, as Cech admitted, a “difficult” place to go and the Blues were given a fight there last season when they needed a late goal from defender Branislav Ivanovic to secure a 2-1 win. It was also there that Jose Mourinho’s Chelsea players defined their title winning campaign in 2004-05 with a victory which led to the manager ordering his players to throw their shirts to the travelling fans. One win in Chelsea’s last four matches, including two league defeats, led Cech to also admit that “it’s not happening” for the team at present.

Cech's own performances have appeared uncharacteristically vulnerable, especially in conceding five goals to Arsenal, a defeat which has stung. “At the moment we get punished almost every time we make a mistake and we have been making too many mistakes - whether that is the team defending or individual mistakes,” Cech admitted.