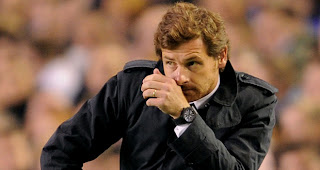 Andre Villas-Boas has insisted he is not concerned about Guus Hiddink being back on the managerial market. Hiddink left his position as Turkey head coach this week following the country's failure to qualify for the European Championships. Villas-Boas said of Hiddink's status as a free agent: "I have no problem with it." Hiddink was only in charge of Chelsea for three months, losing just one Premier League game and a controversial Champions League semi-final on away goals. "This was a good period for the club," said Villas-Boas. "That doesn't mean he could always be as successful as that in a club of this dimension. But Guus is one of the best managers in the world. At the moment, there's not a vacancy. When there's a vacancy, I'm sure that he'll be one of the top candidates."
Email ThisBlogThis!Share to TwitterShare to FacebookShare to Pinterest