AVB praise from RDM; will review role next year 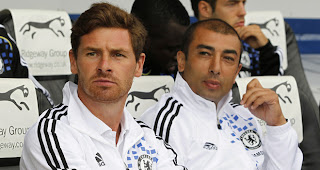 Roberto Di Matteo insists he has no problems operating as Andre-Villas Boas' assistant, but admits he will review his position with Chelsea at the end of the season. Di Matteo joined the Chelsea backroom staff this summer following the appointment of Villas-Boas. The 41-year-old, who played at Chelsea for six years, was last weekend forced to deny rumours he wanted to leave Stamford Bridge to return to management after being linked with the hot seat at Portsmouth. The former Italy midfielder, whose contract at Stamford Bridge runs out next summer, said on Monday: "I'm very happy to be here. It's my club. I feel at home and Andre and I have developed a very good working relationship, so it's something we'll discuss maybe at the end of the season."

A 3-0 win over Wolves on Saturday marked the end of a poor series of results that had left questions over Villas-Boas' future at Chelsea. The Portuguese's inexperience - this is only his second full year in club management - has left doubts about his potential to lead the Londoners to silverware, but Di Matteo insists the former Porto boss is the man to lead Chelsea to glory. "He's very well-prepared and mature for his young age," said Di Matteo, who took his first management job at 38. "He knows he has a very wide knowledge of the Premier League and football in general. There is a lot of focus on his age, but he's a very ambitious and talented manager and he knows his stuff."
Email ThisBlogThis!Share to TwitterShare to FacebookShare to Pinterest