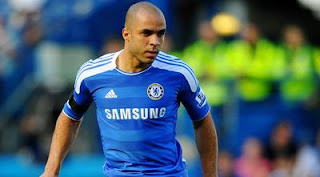 Juventus will make an £8m offer for Brazilian defender Alex in January. The Italian club have been chasing the centre-back since the start of the season and indications are Chelsea will let Alex, 29, go if the price is right. Boss Andre Villas-Boas wants to reshape his defence after an inconsistent start to the campaign and one of his chief targets is Bolton’s £10m-rated Gary Cahill. Chelsea have already inquired about Cahill and not been put off by the response, but to bring the England international in, they need to move a player out – and that will be Alex. Juventus will face competition from Zenit St Petersburg and Tottenham, whose manager Harry Redknapp is a fan - but it is the Italians who are in the driving seat and most likely to match Chelsea’s evaluation.
Email ThisBlogThis!Share to TwitterShare to FacebookShare to Pinterest