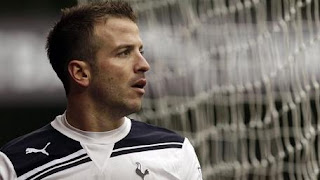 Chelsea are preparing an offer believed to be around £20m for Tottenham Hotspur playmaker Rafael van der Vaart despite the Dutchman recently suggesting he would be looking to remain at White Hart Lane for the long term future. The 28 year old has been a revelation since arriving in North London last year from Real Madrid and has knocked in an impressive 19 league goals in close to forty matches. Chelsea have initially been interested in Tottenham’s other playmaker Luka Modric. Although there has been talk that Chelsea are prepared to make one last meteoric offer of £52m in January it is now believed that van der Vaart would represent a more reasonably priced option despite being older than Modric and Chelsea feel the lure of Champions League football could see the Netherlands international switch London allegiances.
Email ThisBlogThis!Share to TwitterShare to FacebookShare to Pinterest