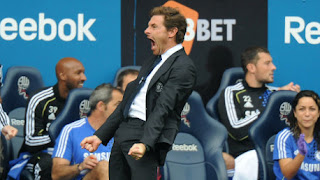 Andre Villas-Boas could be in charge at Chelsea for the next 15 years! The Blues manager, who took over last June, is widely believed to have to win something - especially the Champions League - to keep his job. Chelsea have had seven managers since Roman Abramovich bought the club in 2003 but Bruce Buck said at the Leaders in Football Conference at Stamford Bridge he was optimistic Villas-Boas would enjoy great success in the years ahead. The Blues' chairman said: "It has to be the right guy in the job for ten or 15 years and, in light of Andre's age, he may well be that guy." Former Porto manager Villas-Boas is just 33 and has lost just one game from his ten so far in the hot seat at Stamford Bridge. He has been widely praised by his players, including captain John Terry.
Email ThisBlogThis!Share to TwitterShare to FacebookShare to Pinterest