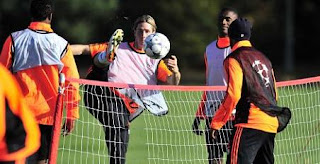 After maintaining their impressive start in the league, with a win over Everton, the Blues now prepare to welcome Belgian club KRC Genk to Stamford Bridge. With a win against Bayer Leverkusen and the draw at Valencia, Chelsea will be looking to consolidate their position at the top of Group E with another home win. Genk, however, have only a single point from two matches and will want to try for at least another, when the sides meet tomorrow in the Champions League. The two sides have not faced each before although Andre Villas-Boas' Porto did play them in last season's Europa League. It’s hard to see past a comfortable Chelsea win in this game but you never know if Genk can stay organised and disciplined throughout the game then an unexpected result could be possible...

Chelsea
Fernando Torres is available tomorrow and the striker will be hoping to start amid his three-match domestic ban, with manager Andre Villas-Boas likely to make several changes. Ramires is out with a knee injury but David Luiz could return after being rested for Saturday's Premier League win over Everton.

Genk
Genk manager Mario Been has several defenders missing from his squad for the trip to Stamford Bridge. David Hubert, Jeroen Simaeys have not travelled, joining long-term absentee Torben Joneleit on the sidelines. In addition, defender Nadson and Czech winger Daniel Pudil are both major injury doubts.

Chelsea have been the most accurate team in the Champions league with their shooting, hitting the target with 68 per cent of their attempts

Genk have yet to score in this season’s Champions League

Genk is the team with the least passes in this season’s Champions League (547)
Email ThisBlogThis!Share to TwitterShare to FacebookShare to Pinterest