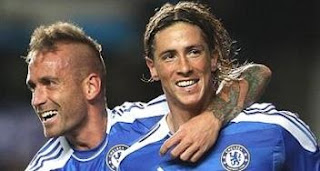 The match was billed as a veritable 'David v Goliath', given that the two sides haven't met and on paper, a one-sided affair would seem to be the only real outcome. Well, the Blues didn't disappoint. Despite some flurries of ambition from the Belgians, Genk just never got going. Chelsea were superior across the park even without rested captain John Terry and stiker Didier Drogba. Oriel Romeu showed great promise on only his second start, and Chapions League debut, for the club. A first half brace for Fernando Torres and a clean sheet for Petr Cech rounded off a fantastic evening at the Bridge.


It really looks like the Andre Villas-Boas effect is working... the fans are certainly beginning to believe, with the threatened mass boycott of this game by those angry at ticket prices failing to materialise. Stamford Bridge was packed almost to capacity, unusual for a European match of this caliber. It quickly became clear the 38,518 crowd would get value for money, despite the six changes that included new talisman Juan Mata on the bench. The 3,500 Genk supporters made more than their fair share of noise, their chants almost as colourful as the visitors' magenta strip.

Things got off to a quick start with Torres somehow poking Nicolas Anelka's seventh-minute chip against the post, which briefly suggested another turbulent outing for the striker. Meireles spared his former Liverpool team-mate's blushes a minute later; the midfielder given an age to line up a shot from 25 yards which found the bottom corner. Torres did not have to wait long to make amends for his miss either, Frank Lampard drifting all too easily into space and threading in the Spaniard, who calmly stroked the ball home. Chelsea were hungry for more and while their passing did not bear comparison with Barcelona, their pressing high up the field did. They were also breaking with pace and Khaleem Hyland was booked after resorting to a desperate lunge to halt the marauding Florent Malouda, who spent the entire night trying to show that he was worth a new contract. 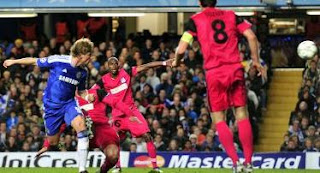 After David Luiz was cautioned for an over-enthusiastic tackle on Jelle Vossen, Malouda should have made it 3-0 midway through the half but he sidefooted Torres' cutback wide with his weaker right foot. Torres was also a constant menace and he duly bagged his first double for Chelsea in the 27th minute when he got in front of his marker to glance Meireles' cross beyond Laszlo Koteles. Lampard missed a glorious chance from Torres' cross as the Blues put together their best football of the half, with Anelka also drilling wide. The fourth goal arrived three minutes before the break, more shocking marking allowing Ivanovic to head in Malouda's free-kick from the right.

The only downside from Chelsea's dominance was Genk star Kevin De Bruyne being denied the chance to showcase the talent that has long seen him linked with the Blues. He showed some neat touches in the second half as the home side eased off, withdrawing Ashley Cole during the interval, Lampard with 20 minutes remaining, and Bosingwa late on. Otherwise, Chelsea might easily have added to their tally, with Torres failing to connect properly with Luiz's lofted ball, Malouda's run and shot saved by Malouda and Genk substitute Fabian Camus getting away with knocking Lampard over in the box. Jose Bosingwa, Meireles and Kalou both sent long-range drives too close to Koteles before the latter made it 5-0 18 minutes from time. It should have been Torres' hat-trick but Koteles saved from point-blank range, with Kalou coolly converting the rebound. Malouda headed over late on as he failed to cap his performance with a goal but the damage was already done.