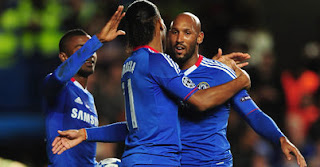 Andre Villas-Boas says Chelsea will not have to sell Didier Drogba, Nicolas Anelka and Salomon Kalou before their contracts expire next summer. This season looks certain to be Anelka's last at Stamford Bridge, while there is increasing uncertainty over the future of Drogba, who has yet to agree a new deal. Villas-Boas revealed this week that Kalou had also been offered a contract extension, but time is running out for Chelsea to secure these assets, each of whom will be able to negotiate a free transfer at the turn of the year. Should all three move on, Chelsea would go from having an embarrassment of riches up front to arguably lacking numbers. "That's why the talks are ongoing," Villas-Boas said. "We still have plenty of time." Indeed, two and a half months must seem like an age to Villas-Boas celebrated his second anniversary as a manager on Friday.
Email ThisBlogThis!Share to TwitterShare to FacebookShare to Pinterest