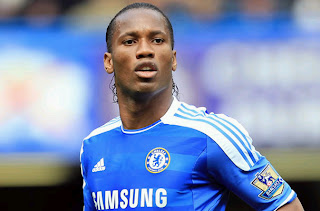 Didier Drogba could be heading out of Stamford Bridge in the summer when his contract expires with Tottenham showing an interesting in signing him on a free transfer. So far this season Drogba has made five Premier League appearances for Chelsea and scored just one goal and provided one assist. The 33-year-old faces competition for a starting place in Andre Villas-Boas' starting line-up with Fernando Torres, Daniel Sturridge, Nicolas Anelka and Romelu Lukaku all fighting for a place in the team. There is no guarantee Drogba is going to put pen to paper on a new deal and a host of clubs are keeping tabs on the situation. It is believed German giants Bayern Munich and a number of Ligue 1 sides including former club Marseille are interested.

source: The Star
Email ThisBlogThis!Share to TwitterShare to FacebookShare to Pinterest