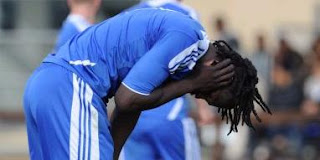 Chelsea's reserves fell to a second straight defeat at home against Wolves yesterday afternoon. The Blues, featuring Romelu Lukaku in attack, fell behind early on despite dominating possession against their more experienced opponents, and the gap was soon doubled as Wolves demonstrated greater efficiency in the final third. Milan Lalkovic, back from a loan at Doncaster pulled a goal back for Chelsea late in the first half but they switched off at the back again to concede a third before the break, and although Lukaku drove a low shot into the net in the second half, it was Wolves who finished the stronger and were deserving of the three points. Lukaku was making his reserve debut, as he is unavailable for Champions League selection in midweek, and was joined in the line-up by Josh McEachran who will have been keen for some competitive football.