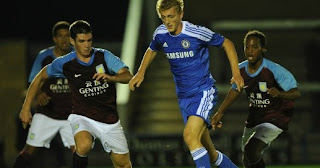 The reserve team's unbeaten start came to an end at Aston Villa last night, with the game's deciding goal coming in the first half. Calum Robinson netted after a mistake by Chelsea's goalkeeper Rhys Taylor who was fortunate not to concede a penalty later on. Each side hit the post once and the game was balanced throughout but following two wins and two draws, Dermot Drummy's side which fielded an unfamiliar attack couldn't breakthrough. Chelsea gave a first start to schoolboy striker Alex Kiwomya who has four goals for the youth team this season. Kiwomya had previous made one sub appearance at this level. Billy Clifford and Kaby Djalo were the wide attacking players and swapped wings during the game. Ben Gordon played his first match since returning from loan at Peterborough.