The racism row - where will it end? 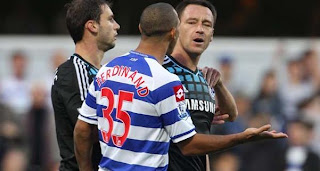 So, here we go again... First it was the 'offensive' chanting that caused a media storm and now it's 'racism'. Neither of these are new to the game, both on the pitch and in the stands, and of course the latter has been the subject of a global campaign in recent years. Racism is absolutely unnacceptable anywhere, anytime. Behaviour that is aimed specifically to individuals or groups in a racist fashion should be outlawed and I absolutely support - along with anyone and everyone - the current activity on this.

However, and this is where things get a little bit messy, use of certain words or gestures in the heat of a moment, are something that should be considered wisely. This type of act, is not necessarily one of racism but one of anger, where the content could be deemed racist. There is a fine line between these two things. I have no idea what was said by John Terry to Anton Ferdinand, and I suspect we'll never know the exact detail, but I strongly believe any abuse that was vented by the Chelsea captain was born out of frustration and temper.

I am sure we can all relate to moments in time when the red mist decends and we make our feelings known without thinking. Mouth before the brain and all that. But that doesn't make us, individually, a bunch of racists does it? I have sworn (accidentally) at times, forgetting that it was completely unaccepatbe for the particular environment. Also, I have worked with many people of different ethnicity and it is not uncommon for certain words to be used in plain conversation. It's just the way we talk. Nobody means any offence by it.

The problem of course, again, is the establishment. More specifically, media. Everything is under the microscope and analysed far more than ever before. People do have the right to make complaints but when it's between indviduals, carrying out there chosen profession, in the heat of the moment are we right to judge? Discuss.
Email ThisBlogThis!Share to TwitterShare to FacebookShare to Pinterest