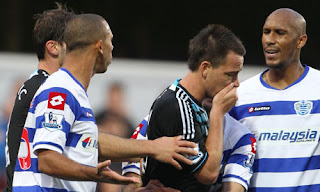 The Professional Footballers' Association has pledged to assist the Football Association in the John Terry racism inquiry after QPR dismissed reports three of their players had already been called as witnesses. PFA chief executive Gordon Taylor offered his help in the Patrice Evra-Luis Suarez race row two weeks ago and his organisation made it clear they would be prepared to do the same in the Terry-Anton Ferdinand saga. The PFA said in a statement: "There is a proper process to be followed for such serious issues which is governed by the Football Association, as the game's regulator. We will assist and adhere to that process in any way which is considered appropriate, mindful that all the players are our members and as such we expect the process to be fair and transparent in establishing the facts in each case."
Email ThisBlogThis!Share to TwitterShare to FacebookShare to Pinterest