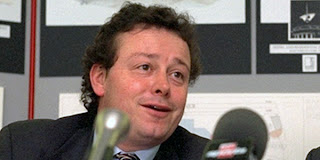 It has been 15 years since the tragic death of former vice chairman of Chelsea Football Club Matthew Harding, who died in afateful helicopter accident 22nd October 1996. Harding was a lifelong Chelsea fan, and when his club required substantial investment to progress at a pivotal time in 1994, he stepped up, contributing approximately £26.5m and joining the board. This money substantially funded the first new stand at Stamford Bridge in 20 years when, in 1993, the North Stand, later renamed in his honour as the Matthew Harding Stand, was constructed. Upon completion in 1996, Stamford Bridge's capacity rose to over 40,000. It is this gesture that Chelsea fans will remember Harding the most, and a crucial factor as to why so many Blues fans would loath to lose the famous Fulham Road ground with ambitions by the club to seek a new location for a stadium if redevelopment is not possible on the current site.

Moreover, financial investment for players was made available by the enthusiastic Harding as Chelsea entered a golden era. Harding was one of the most passionate Chelsea fans around. Despite being a businessman of great acumen, often watching from his private box, Harding was visibly frenzied whenever Chelsea played with his emotions. Devastatingly, Harding missed the chance to see his beloved Chelsea lift silverware for the first time in almost 25 years, an achievement attributed by many to the work done by Harding and the board in the years before. Harding was on his way back from watching Chelsea at Bolton Wanderers when pilot Michael Goss was unable to control the helicopter that crashed, taking five victims. 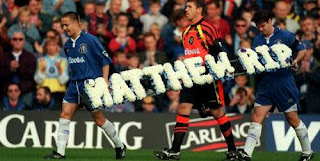 Seven months later, Chelsea claimed the FA Cup at Wembley with a 2-0 victory against Middlesbrough, dedicating it to Harding as a tribute. Harding laid the foundations to one of the most successful periods in Chelsea Football Club's history, claiming five major trophies (two FA Cups, League Cup, UEFA Cup Winners' Cup and UEFA Super Cup). With the huge success in recent years since the arrival of Russian billionaire Roman Abramovich, it is arguable as to whether this could all have been possible had Chelsea not been put in a position, in part due to Harding's efforts, to be in contention for major prizes. Nobody will forget his contribution to theBlues; 15 years on his commitment and contribution to our beloved Blues becomes more and more significant. RIP
Email ThisBlogThis!Share to TwitterShare to FacebookShare to Pinterest