Luiz's 'healing hands' are no gimmick 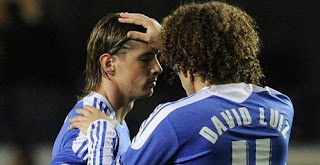 Fernando Torres' two goals for Chelsea in the Champions League may have been attributed to a strange pre-match ritual from David Luiz, but the Brazilian defender takes his religious faith more seriously than gimmicks to help team-mates score. The Blues strolled to a 5-0 win over Genk and it was revealed that Luiz may have asked for some 'divine intervention'. Luiz is proud of his his Christian beliefs and has links with the Atletas de Cristo (Athletes of Christ) – a non-profit organisation that is made up of sportsmen and which was started in Brazil in 1984. And, while this was not a practice aimed specifically at Torres and his difficult start to his Chelsea career, there is satisfaction within the squad at him now collecting four goals in his past four outings as there is a feeling that the 27-year-old has been unfairly criticised since joining in January. Keep it up I say!
Email ThisBlogThis!Share to TwitterShare to FacebookShare to Pinterest