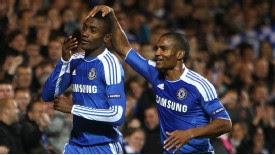 Salomon Kalou has suggested he could be ready to leave Chelsea in search of first team football - but insisted he is happy at the club. Kalou came off the bench to score in last night's 5-0 thrashing of Genk in the Champions League. But that was his 99th appearance for the club as a substitute and the player now wants to be playing more regularly to further his career. The 26-year-old will be out of contract at the end of the season, meaning Chelsea will need to sell the player in January if they are to avoid losing him for nothing on a Bosman. Both Arsenal and Liverpool have already been linked with moved for the played once the transfer window reopens.

"That's what every player wants to have, game time,'' said Kalou. "Because if you're not playing every weekend, how are you going to improve yourself? So it's very important to play to improve and to push yourself to the limit. That's what I'm looking for. We're still talking and hopefully the club is putting itself in a good position and me myself as well. I think we're going to agree on something good. I want to stay, I want to be here. I like Chelsea. I've had a fantastic five seasons here and won some prizes. Chelsea are looking forward to the future and I'm still a young player and I think my future can be here.''
Email ThisBlogThis!Share to TwitterShare to FacebookShare to Pinterest