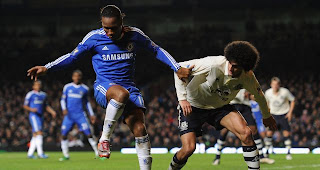 The last time Chelsea managed to beat Everton was the FA Cup final in 2009, which says a lot about just how tough a nut Everton are to crack. The Toffees have drawn their last five Premier League meetings at Stamford Bridge - and also knocked Chelsea out of the FA Cup there last season in a dramatic penalty shoot-out after a Leighton Baines equaliser in the last minute of extra time. Another draw could be on the cards too, as Chelsea have failed to keep a clean sheet in their past six Premier League clashes. This season, however, might prove the end to the winless streaks for Andre Villas-Boas' men, as the former Porto boss is yet to lead his men against Moyes' side. Chelsea have been the 'quiet achiever' of the season thus far, while the talent-laden Manchester sides have stolen the headlines.

Chelsea
David Luiz could well be rested this weekend. The Brazil defender only returned on Thursday after playing a full 90 minutes twice for his country in the past week. Fernando Torres serves the second instalment of his three-match ban, goalkeeping understudy Hilario is still recovering from a hip and back complaint and Michael Essien remains the only long-term absentee. John Terry could be making his 350th Premier League appearance for Chelsea - he'll be the fifth Blues player to reach 350 in the league.

Everton
Midfielder Leon Osman is doubtful but striker Victor Anichebe is Everton's only long-term injury victim. The Toffees have Jack Rodwell available after the red card he was shown against Liverpool was rescinded on appeal. Tim Cahill will be monitored after an ankle injury forced him to withdraw from the Australian squad last week, and John Heitinga is doubtful after missing the Netherland's midweek game with a knee injury.

Facts and stats
No team in the Premier League has conceded fewer shots on target than Chelsea (25).

Frank Lampard has scored four goals from just five shots on target in the Premier League this season.

Chelsea have won nine and lost none of their last 10 Premier League games at Stamford Bridge, but have gone five games without a clean sheet on home soil.

Louis Saha has scored five goals in six appearances in all competitions for Everton against Chelsea.

Everton have won none of their last eight Premier League trips to London, drawing six.

Everton have gone 16 games at Stamford Bridge since their last Premier League victory (W0 D9 L7), but the last five games in a row have all been draws. No Premier League fixture has ever seen six consecutive draws.
Email ThisBlogThis!Share to TwitterShare to FacebookShare to Pinterest