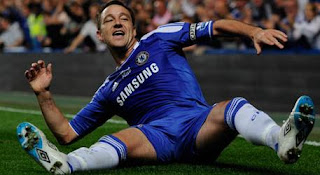 The season continues with another home win for Chelsea, as Everton's resilient run without defeat at Stamford Bridge came to an abrupt and dismal end on Saturday. The Blues are unbeaten in seven in west London and Andre Villas-Boas’ rebooted side had simply too much attacking flair for Toffees. Despite a solid start, David Moyes’ men never really fashioned any clear-cut chances and paid for their defensive carelessness with goals from Daniel Sturridge, John Terry and Ramires. The only chink in chelsea's fine armour was to concede late-on and another clean sheet disappear. As part of Chelsea’s annual charity date in the calendar, the Blues were sporting the Help A Capital Child logo on their shirts.

Chelsea’s start was slow and lacked momentum; Mata and Sturridge seemed to attack in isolation, final balls from Bosingwa and Cole were misplaced and Drogba struggled to keep hold of the ball. Chelsea’s first cohesive move brought about the opening goal, Drogba dropped deep to get involved in the play, and spotting Cole’s run into the area passed the ball into the defender’s path. Cole did well to beat the opposition and diverted it across goal, where Sturridge arrived with perfect timing to send a diving header home from close range for his third in two games. Sturridge now has 4 goals in 4 Premier League matches. Chelsea took a two-goal advantage going into half time, thanks to John Terry’s injury-time header. With a Chelsea free-kick, Lampard swung the ball into the box, Terry leapt highest in a group of four, and Everton keeper Howard could only flap the ball into the net. 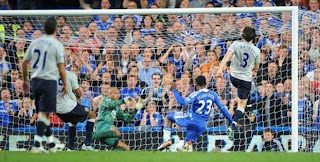 Everton were quickly on the front foot in the second half, Osman whipping a low shot against the outside of Cech’s left-hand post after just 20 seconds, but Chelsea were equally fast to react and assume a greater level of control than the first half had seen. Chelsea got their third goal on the hour, Mata found Drogba in the centre-circle who drove hard at the Everton defence before slipping the ball back into Mata’s path. Mata squared the ball across the danger zone to meet Ramires to slide it home from a yard out. It was the Brazilian’s last contribution, a moment later he was forced to limp from the field with a knee injury obtained in scoring. Florent Malouda came on in his place. Mikel and Mata both earned rests too, withdrawn after 76 minutes with the game well won, replaced by Romeu and Anelka. Substitute Vellios scored for the Toffees after slidding home a low Drenthe cross with his first touch nine minutes from time.

The game was won though and three points leaves Chelsea in third place but only one point behind Manchester United who dropped to second in the league after a draw at Anfield. Chelsea’s next match is at home to Genk in the Champions League on Wednesday, before a short trip to QPR next weekend.