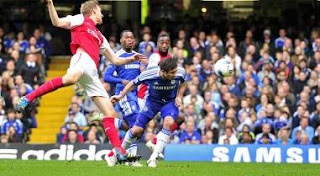 Arsenal travelled to Stamford Bridge to take on Chelsea, as the Gunners looked to narrow the gap at the top of the Premier League table. However, the Blues had plans of their own as they were looking to try and cut the lead that the Manchester clubs had established at the top of the table. After the shock of the trip to Loftus Road, and the two hours played at Goodison Park, a much needed win and clean sheet were high on the Blues' agenda. With the game being played at home, a Chelsea win seemed most likely, with a draw being an ideal result for the Gunners, whose away form of late has been dreadful.

Both the teams started the game in emphatic fashion, as they crafted a number of goal scoring opportunities early on in the game. The dead lock was broken inside the first fifteen minutes. After a long ball was played to Juan Mata on the right flank, the Spaniard cut back and curled a cross into the box. With the Gunners defenders sleeping on the pitch, Frank Lampard managed to rush in between them and knock the ball past the keeper. In the 36th minute, Arsenal went on to equalise, as Aaron Ramsey played Gervinho on with a delicate through ball. The winger zipped forward and then cut the ball back to Robin Van Persie, who had the simplest of tasks of stroking the ball into the back of the net. It looked as though the sides might go in level, but in the 45th minute, Chelsea were awarded a corner. The ball was knocked into the heart of the defence, but once again with the Gunners defenders all at sea, John Terry managed to leap the highest as he comfortably knocked a ball past the keeper and into the back of the net.

The second half kicked off with Arsenal really getting their game back to the level that we have come to expect of them as they started things of rather positively. After just four minutes Andre Santos exposed the poor defending in the game once again as he darted down the flank. He went on to gain his composure as he slammed the ball into the goal through Petr Cech. Ten minutes later, Walcott charged towards the Chelsea goal, but tripped over the ball. However, the forward got right back up and zipped forward as he took a shot at goal from the outside of the box. The winger’s effort was hit with such power that it beat Cech with ease and helped Arsenal take a three goals to two lead. With ten minutes remaining, Mata was causing all sorts of problems again, as he took a long range pop at goal. His effort deflected off Alex Song slightly, but that proved to be enough to guide the ball pat the keeper and into the back of the net. In the 85th minute, Terry slipped as he tried to receive a back pass and Van Persie zipped past the defender, before beating Cech and then stroking the ball into the back of an empty net. The Dutchman then completed his hat trick in the stoppage time, as he cannoned a shot beyond Cech who despite making an effort to stop the ball, just couldn’t get his hands on it.