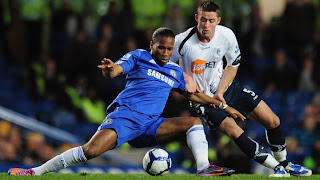 Bolton boss Owen Coyle will be cursing his luck as his hapless Trotters side welcome Chelsea to the Reebok Stadium on Sunday looking to halt a run of five consecutive defeats. Coyle’s men have failed to win a game since the opening day of the season, sending them to the foot of the table. The Trotters have failed to score in their last five league and cup games against the Blues and have failed to win in the last 15 against their opponents. Andre Villas-Boas will be intent on making that 16 on Sunday as he continues to remodel the side into a well oiled attacking machine. Juan Mata has taken to the Premier League like a duck to water and is brining out the best in Ramires and Jon Obi Mikel in the holding roles. Raul Meireles has also added some much needed craft to the centre of the park and with Fernando Torres getting back to his best everything looks rosy at Stamford Bridge.

Bolton Wanderers
Manager Owen Coyle faces further selection issues ahead of his side's clash with Chelsea at the Reebok Stadium on Sunday. Coyle is already without a number of long-term injured, with the casualty list compounded this week when it was announced midfielder Stuart Holden faces another six months on the sidelines with a knee problem. To add to his woes, on-loan Gael Kakuta is ineligible as he cannot face his parent club, David Wheater and Ivan Klasnic are suspended, and goalkeeper Jussi Jaaskelainen is doubtful with a leg knock.

Chelsea
Torres will miss the trip to Bolton after his sending off against Swansea last week meaning former Trotters favourite Nicolas Anelka or Didier Drogba will start up front.Daniel Sturridge could return to the Chelsea line-up for Sunday's trip to Bolton. The forward missed Saturday's win over Swansea with a knee injury and also sat out Wednesday night's Champions League draw at Valencia, but he is fit to return to the club where he spend the second half of last season on loan. Goalkeeping understudy Hilario is still a week or two away from recovering from a hip and back complaint, while Michael Essien (knee) is a long-term absentee.

Bolton have lost the last eight Premier League games in a row at the Reebok versus Chelsea, the longest losing run of any team at home to a single opponent

Bolton have lost their last five home matches, their longest run in the history of top flight football. Oddly, before this run, they won five matches in a row at the Reebok Stadium

Bolton have lost 10 of their last 11 Premier League matches

The Trotters have drawn just one of their last 22 Premier League matches
Email ThisBlogThis!Share to TwitterShare to FacebookShare to Pinterest