It was a dream performance from Frank Lampard, who underlined his importance to Chelsea with a hat-trick at the Reebok Stadium, helping the Blues to a 5-1 win on an afternoon to forget for Bolton goalkeeper Adam Bogdan. With the Blues cutting through their opponents' defence at will, Lampard and Daniel Sturridge both netted twice in the first half, and two errors in quick succession by Bogdan allowed each player their second. Dedryck Boyata scored his first Bolton goal soon after the restart, but it counted for little as Lampard dispatched his third in the 59th minute. It means Chelsea go back to third meanwhile Bolton stay rock bottom, with their losing streak extending to six league games.

Andre Villas-Boas handed Didier Drogba a start, the Ivorian taking the place of the suspended Fernando Torres, while Sturridge returned having recovered from a knee problem. Bolton were looking for a positive result to lift them out of the relegation zone, but the omens were not good and within two minutes, they were behind. Jose Bosingwa's cross was intercepted by Boyata to earn the Blues a corner and when Juan Mata swung it in, Sturridge rose unmarked to convert, the forward abruptly halting his celebration against his former club. Moments later Sturridge fired narrowly wide as the visitors threatened to run riot. At the other end, David Ngog skewed an effort high and wide, and Martin Petrov hit a free-kick into the wall.

It was not long before Chelsea were further ahead, though, and on the quarter-hour mark it was 2-0 as Sturridge squared in the box for Lampard, who had the space to slot the ball past Bogdan. Almost immediately, Bogdan was called upon to stop Lampard scoring another and Mata then skied his attempt from Sturridge's cross. Bolton needed a response but were unable to make much of a couple of corners before two howlers in two minutes by Bogdan saw the game effectively end as a contest. First the young Hungarian let Sturridge's shot from the edge of the box loop in off him in the 25th minute when he should have saved. He then parried David Luiz's strike straight at the feet of Lampard, who tucked it away gleefully. The shell-shocked hosts managed to wrestle back some possession, but were unable to produce much going forward. Referee Peter Walton blew for half-time with boos ringing out around the stadium. 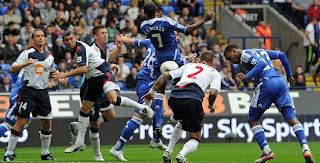 Owen Coyle replaced Gretar Steinsson with Zat Knight at the interval and having started the second half positively, Wanderers pulled a goal back a minute in when Boyata nodded in Petrov's free-kick. The hosts did their utmost to sustain more pressure, but it took a great tackle by Knight to halt Drogba's progress and Ramires then shot over after Bogdan had made another mistake, flapping at a corner. Drogba flashed an effort across the face of goal and was the provider when Chelsea added to their lead soon after, laying the ball across the area for Lampard to sweep in. Bolton refused to give up and thought they had scored again when Davies prodded in Petrov's cross. But although replays appeared to show the ball had crossed the line before substitute Branislav Ivanovic's clearance, Walton ruled it was no goal. Sturridge then dragged a chance to complete his own treble wide before Wanderers substitute Chris Eagles saw his effort come back off the post.

Lampard stole the show with a vintage performance to silence some of his recent critics. The 33-year-old, who was dropped from the England team last month and also found himself struggling to break into the Chelsea starting XI, caused problems for the home side throughout with his trademark forward runs. Bu for the Blues, still no clean sheet although the goals do keep coming...