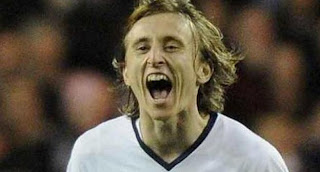 Tottenham playmaker Luka Modric "could be like Xavi" to Chelsea, according to former manager, Ruud Gullit. Spurs chairman Daniel Levy always insisted that the midfielder was not for sale 'at any price' and is believed to have opened talks with the 26-year-old over a new £100,000-a-week contract. But according to Chelsea legend Gullit, manager Andre Villas-Boas should still look to sign Modric, and has tipped his former club to make another move in the January transfer window. "The player Chelsea still need, for me, is Modric," Gullit said. "They have great players all around the pitch but he has something Chelsea doesn't have at the moment. He is creative and dominates the passing game in the midfield – he could be like Xavi or Iniesta are to Barcelona. I was surprised Tottenham didn't accept £40m because they are known to sell their best players for good offers. I think Chelsea will try to sign Modric again in January and maybe this time they will get him."
Email ThisBlogThis!Share to TwitterShare to FacebookShare to Pinterest