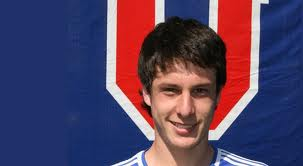 Chelsea are keeping close tabs on Chilean starlet Igor Lichnovsky, their South American scout has confirmed. Highly regarded Chilean observer Jorge Alvial has revealed that his employers are keen on the 17-year-old. The central defender is currently with Universidad de Chile, and is yet to make his first-team debut. "Igor is a very good player," Alvial said. "I have been following him for some time and he is in the mind for Chelsea. He is one of the young players that I see that has good future, as he has good skills." Alvial revealed that the club are already looking at pursuing the option on Lichnovsky. "The scouting on Lichnovsky has already been done for Chelsea, but we are going on step by step, being calm, having a look to all what this situation involves" he added. "We have to consider that the transfers from South America to England are difficult. For example, I followed Franco Di Santo and when he was transferred to Chelsea he spent six months getting adapted."
Email ThisBlogThis!Share to TwitterShare to FacebookShare to Pinterest