Blues edge toward new stadium - home or away 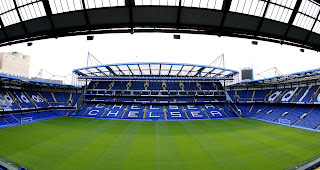 Chelsea are the latest club to announce plans to build a new stadium after making a bid to buy back the stadium freehold from a supporters group. Unless they regain ownership of the pitch and stand’s from the Chelsea Pitch Owners shareholders however, the club are unable to sell Stamford Bridge and build elsewhere. The CPO was formed in 1993 after a decision was made to put the pitch and stands at Stamford Bridge into friendly hands to ensure they could never be at risk of developers who wanted to get rid of the club. "That threat has now gone under Abramovich’s ownership," insists chairman Bruce Buck.

Chelsea have therefore written to each of the estimated 12,000 CPO shareholders advising them of their wish to buy back the freehold for the ground so that they can redevelop if they suddenly decide that they are in a position to acquire a new site. Stamford Bridge has been Chelsea’s home for their entire 106 year history and has a current capacity of 41,800. The option of building a stadium to compete with the likes of Manchester United and Arsenal with a capacity of circa 55,000-60,000 has been in the offing for some time but the club are as yet undecided on whether to up sticks and move to a new development or stay put and redevelop the existing site.

One of the sites favored by Chelsea is the Battersea Nine Elms area next to the decommissioned power station, with views of the River Thames. They have also looked at a number of other sites in the west and north-west of London to include the redevelopment of Earls Court, together with White City, Imperial Wharf, Wormwood Scrubs and Old Oak Common. The club have been investigating ways of expanding Stamford Bridge since 2004 and have spent around £700,000 on two architectural firms, both of whom have come to the conclusion that none of the four stands can be significantly increased in size.

Blues chairman Bruce Buck and and chief executive Ron Gourlay have been reticent to release details of a possible move until now but the CPO issue has forced their hand. Both have now appealed to the 12,000 shareholders, who are mostly fans, to sell their 15,000 shares to the club for the price they paid in return for various incentives at any new stadium. Each share cost £100 and Chelsea are hoping that shareholders will not hold the club to ranson, insisting there was no room for negotiation. Buck said shareholders were getting back far more than the land was worth when the 199-year lease on Stamford Bridge was taken into account. He said: “Bear in mind that no-one bought these shares as a financial investment. Everyone bought these shares as a way of helping the club and they also bought them as mementoes and souvenirs."

There will be a meeting of CPO shareholders at Stamford Bridge on 27th October to vote on the issue and the club will need 50 per cent of attendees or those who have arranged to vote by proxy to support their plan. The club propose paying £10m, to clear the debt and recompense the £1.5m invested by shareholders.
Email ThisBlogThis!Share to TwitterShare to FacebookShare to Pinterest