Are football chants really THAT disgraceful? 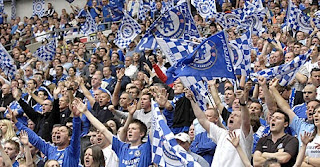 For the first time since starting this blog, I am compelled to write about a subject that is not specifically Chelsea related - something I vowed not to do - but after the ding-dong in north London at the weekend, and subsequent fall-out, I just have to have my say.

When I first started going to Stamford Bridge, in the early 1980s, the specter of hooliganism loomed large. Two decades of violence had seen to that, and for a parent, or brother, taking a child to a game must have been an unnerving experience.

At Chelsea, the away fans were always three days by donkey from the pitch (as were most of us back then), in the old north stand, but despite their distance, they could be well heard - to a young and naive teenager, this was equally unnerving. Some of the things and words I encountered were shocking believe me. I can also remember fans standing on one another's shoulders smashing the electronic scoreboard for good measure. And this was all in my first game!

In the years since, English football has done a decent job of eradicating hooligans. Stadiums are largely all-seaters, unruly fans are swiftly dealt banning orders and policing has advanced to ensure particularly volatile sets of supporters are kept apart if there's a potential for violence. There's still trouble, and probably always will be, but if you're an average fan going about your business you probably won't see it. Put it this way - the chance of an innocent victim being beaten up by a fan at a Premier League game is virtually nil. Hooligans generally fight other hooligans, and the prominence of surveillance cameras, along with the risk of criminal charges, means that typically happens away from the stadium. All of this has made going to football matches a much more family-friendly experience than it was 25 years ago. In recent times, there are greater numbers of female supporters and I frequently see toddlers - their parents without the slightest concern that anything untoward could befall them.

But there's a new problem - or so we're lead to believe. While today's youth will likely be spared the sight of fans charging streets ready to fight, they are frequently being subjected to the kind of 'sick abuse you wouldn't wish on your worst enemy'. This isn't new though, is it? As far as I can remember (and it's the best part of three decades) abusive have chants have been the stable of the terraces up and down the land. Now I do agree that some chants can be harsh to say the least, but that does not mean I join in, condone it, nor do I likely share any of these views but, and it's a BIG but, it's part of the - dare I say - fan banter that is generally forgotten once the final whistle has blown. I for one have never even remotely been shocked by any experience I have had, in any ground, during my thirty years as a football fan. It seems to me that, yet again, modern technology and media have joined forces to highlight this 'new' curse and now there are calls for an investigation and suggestions to ban chanting. What a load of old pish.

It was reported that during the Carling Cup tie between Leeds and Manchester United, groups of Leeds fans mocked the Munich air disaster of 1958. Sorry guys, but I have witnessed this particular chestnut many, many times. As have a number of my friends who happen to be United fans. Let me tell, it's water off a duck's back with all of them. Then, on Sunday, the north London derby was marred by a similar 'lack of morality' in the stands. Arsenal fans taunted Emmanuel Adebayor by singing about the ambush on the Togo national team bus, which killed three people. Clearly not nice, but hey it would have been questions about his parentage on another day. Tottenham supporters called Arsene Wenger a pedophile. Again, absolutely nothing new. Find me someone who claims not to have heard this before and I'll show you a liar.

Apparently, both incidents have prompted investigations by the Football Association, while Spurs and Arsenal released a joint statement promising to search out the perpetrators and deal out swift justice in the matter. But what exactly do these people expect to happen? Stewards marching out alleged 'chanters'? Clubs dishing out bans? Police issuing warnings or fines? Has the world gone mad? English football is not - as had been suggested - heading back to the 1980s. It is well and truly in the 2010's and it might well be the media that needs to include itself in any investigation. Discuss.
Email ThisBlogThis!Share to TwitterShare to FacebookShare to Pinterest