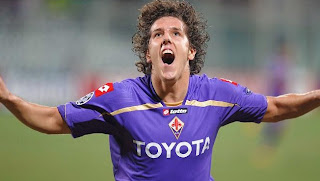 Steven Jovetic hasn’t yet signed a contract with Fiorentina, president Andrea Della Valle has admitted, with the 21-year-old stalling amidst interest from other European clubs. Jovetic has starred for both club and country since moving to the Serie A in 2008, and is currently refusing to sign a contract in case interest turns into an offer in January. Chelsea have long chased the Montenegro international, with his agent admitting recently the club had made enquiries. "There are many teams interested in Jojo and among these could be Chelsea,” Fali Ramadani said. And while Chelsea are still interested, Fiorentina say they want to tie down the star, who has a £21 million exit clause in his contract. "He's an extraordinary player. We certainly don't want to deprive ourselves of his ability, but there is no need to put pressure on him regarding his contract,” Della Valle said.
Email ThisBlogThis!Share to TwitterShare to FacebookShare to Pinterest