Visit to Old Trafford will be a crucial test 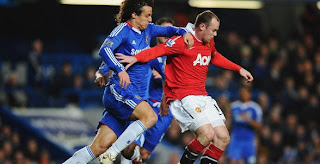 Chelsea meet Manchester United on Sunday and, even though this season is in its infancy, it is already taking on the appearance of a game the west Londoners cannot afford to lose. United's start has been impressive, rather like Chelsea's was this time last year, while Andre Villas-Boas has made a steady start at Stamford Bridge. It has been a case of so far, so good for the young manager but defeat on Sunday would leave the Blues five points adrift of United - and quite possibly Manchester City if they win at Fulham. Chelsea have the upper hand though, with 13 wins from 38 meetings, against United in the Premier League.

If there is a title challenger from outside Manchester, it must be Chelsea. That's why the game at Old Trafford is already so important. It will be a tough test for United as well because, although they have played so well this season, they have rarely been put under any pressure. Villas-Boas has described the game as 'a different challenge'. If he can get a result at Old Trafford, it will give a huge lift to the belief and confidence of everyone at the club. Chelsea have got to stop United, as they have been doing to other teams this season. If they can find a way into the game, and United have not scored, they will test United in a manner no-one has managed so far this season.

Villas-Boas has freshened Chelsea up by bringing in younger legs and a bit more pace: Juan Mata looks a very good player and Daniel Sturridge gives an extra dimension with his quick feet and eye for a goal. There are question marks over United goalkeeper David de Gea and Chelsea will want to put him under pressure as quickly as possible by testing him out with shots and getting the ball in and around his head. Chelsea will also want to test United's defenders and see how they react collectively because the season has been a cruise so far. In no way is it a foregone conclusion United will win this game because the London club have too many good players.