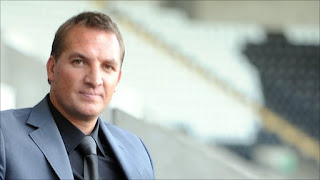 Swansea manager Brendan Rodgers has no plans to go on the defensive when he returns to face the club that gave him his big break. Rodgers was appointed youth-team manager at Chelsea in 2004, under Jose Mourinho's stewardship, before going on to become reserve-team boss in 2006. The impression he made proved a springboard for his first senior managerial role at Watford, before a difficult spell at Reading saw him head to south Wales and play-off glory. The 38-year-old is now set to visit Stamford Bridge, on the back of the Swans' first Premier League win against West Brom, and has no interest in what Mourinho referred to as 'parking the bus', even though his side will be underdogs.

He said: "We need to respect the opponent, they have world class players. But we went to Arsenal last week and nearly got a result, and they are playing with a similar style to us. And for an hour against Manchester City we did very well against one of the top sides in Europe.We are learning all the time and we know you have to be collectively right, we are not naive enough to think we can open everything up like we do at home, but we are still going to try and maintain our idea to control possession and dominate with the ball.''

source: ESPN
Email ThisBlogThis!Share to TwitterShare to FacebookShare to Pinterest