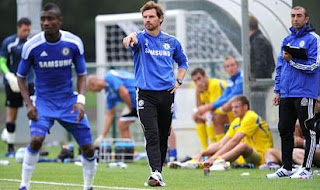 Andre Villas-Boas has shrugged off Manchester United and Manchester City's blistering starts to the season and insists his Chelsea side are good enough "to grab them". United and City stormed to the top of the Barclays Premier League before the international break. Last time out Chelsea edged past Norwich before watching as City romped to a 5-1 win at Tottenham and United annihilated Arsenal 8-2. But Villas-Boas was unfazed, saying: "It's good for them. They've gone on to score a lot of goals and it's good for British football. We just hope to score one more goal than the opponents."

He added: "Man United played to perfection and managed to score a lot. They are, with Man City, leading the table and we are two behind them. We want to grab them." Chelsea have hardly dazzled since Villas-Boas took charge and the 33-year-old admitted the quality of their game needed to improve. "I think it can be better and our objective is to transform it," he said. "We have to improve on a weekly basis, on a game-to-game basis. I'm very happy that we have been creating enough chances to win games and this is a good sign for us. We just need to improve on the quality and fluency of the game. Let's see what kind of response we have now."
Email ThisBlogThis!Share to TwitterShare to FacebookShare to Pinterest