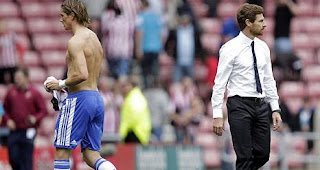 Andre Villas-Boas is to look in to an interview given by Fernando Torres in which he appeared to criticise his own team-mates. Torres spoke to the official website of Spain's Primera Liga last week, with an English translation later appearing on the forward's personal website. Torres, who has endured a miserable run in front of goal since his move from Liverpool, was quoted as branding Chelsea's 'older' players as 'very slow', and hailing new team-mate Juan Mata as a necessary signing. Villas-Boas sought an explanation from Torres, who claimed his words were not translated accurately on his own website. The interview was authorised by Chelsea, otherwise Torres would have been facing a fine.
Email ThisBlogThis!Share to TwitterShare to FacebookShare to Pinterest