Despite being mobbed at the airport on Tuesday, there was no sell-out crowd to greet the returning Juan Mata on Wednesday evening, with Chelsea apparently not the only club struggling to fill their ground for Champions League group games this season. It was an enthralling night of action at the Mestalla as Valencia and Chelsea played out a 1-1 draw in the Champions League. Frank Lampard looked to have scored a trademark winner that would have put the visitors in complete command of Group E - but Andre Villas-Boas brought him off for Salomon Kalou, with seven minutes remaining, and the new man immediately conceded a penalty. Roberto Soldado scored, with Chelsea's frustrations boiling over at the final whistle after what was a missed opportunity.

The home fans did their best to create an intimidating atmosphere but they were almost silenced inside three minutes when captain David Albelda presented the ball to Fernando Torres, who was bundled over in the box by Adil Rami but strangely elected not to appeal. Victor Ruiz nearly put the ball in his own net two minutes later as Chelsea assumed complete command and, while Valencia began to settle, they looked a threat every time they broke. Ruiz was booked for what was nearly a last-man tackle on Ramires, with Lampard's low free-kick saved by Diego Alves, who was making his first start of the season after Vincente Guaita was dropped. Valencia finally began to look like the side that had caused Barcelona so many problems in their last home game and went close in the 25th minute when Pablo Hernandez sent Jordi Alba's cross into the sidenetting. 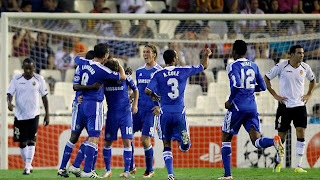 Albelda earned an early second-half booking for tripping Florent Malouda but the game was otherwise in danger of falling flat until it exploded into life in the 51st minute. Jose Bosingwa was given all the time and space he needed to swing in a cross for Torres, whose bullet header was somehow clawed away by Alves after the keeper initially went the wrong way. Alves then completely justified his selection with three stunning saves in two minutes, first when one-on-one with Ramires, then from point-blank range from Torres and then when Ruiz diverted a corner towards his own net. But he was statuesque as Chelsea finally took the lead in the 56th minute, Lampard drilling home his first goal of the season from open play from 20 yards after being picked out by Malouda. Lampard barely celebrated but was mobbed by his team-mates. The home side sent on Pablo Piatti for Jeremy Mathieu and Villas-Boas responded by withdrawing the excellent Ramires - who picked up a knock in the first half - for Raul Meireles.

Cech kept Chelsea's lead intact when he tipped over Piatti's rising drive as Valencia began to go for broke, manager Unai Emery introducing Jonas and Sofiane Feghouli for the final 18 minutes as Chelsea introduced Nicolas Anelka for Torres. Cech held Feghouli's deflected drive and Piatti went close again but Malouda could have killed the contest when he shot tamely at Alves after a well-crafted break. Lampard left left the field to a standing ovation from the travelling fans - one which was reciprocated - as Kalou came on for the final seven minutes. It proved a disastrous decision as the substitute immediately gave the ball to Jonas, whose 25-yard curler was tipped wide by Cech, and the striker then inexplicably handled the resultant corner in the box. Referee Nicola Rizzoli had no hesitation pointing to the spot and booking the new man before Soldado stroked the penalty beyond Cech with just three minutes remaining. But there was still time for Anelka to waste a glorious chance to win it in the final minute as Alves once again came out on top in a one-on-one clash before a heavy touch once again let down Soldado at the other end. The game finished with a flurry of yellow cards, as Villas-Boas stepped in to calm down his frustrated stars.