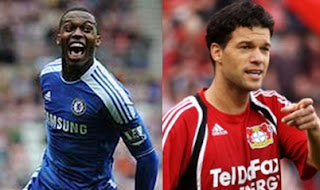 Chelsea will look to make it 10 straight matches without a loss as the Blues look to be slowly marching towards the same type of aura that made them such threats in the Champions League in years past. The wins in the Premier League have not been in overly dominant fashion, but a sense of invincibility is creeping into the club which is invaluable in Champions League. So, the first ever Chelsea v Bayer Leverkusen fixture is set to unravel tomorrow, as two in-form teams look to get off to winning start in Group E. Chelsea have historically performed well against German opposition at Stamford Bridge, but will that pattern continue against a Bayer Leverkusen side that have gone undefeated in their last four Bundesliga matches?

Chelsea
Daniel Sturridge could start alongside Nicolas Anelka up front as Didier Drogba is a still out following his head injury and subsequent concussion against Norwich City two weeks ago. Michael Essien will be out until January after undergoing surgery to repair a ruptured anterior cruciate ligament and meniscus in his right knee, while Ramires is suspended and Romelu Lukaku and Ryan Bertrand are ineligible.

Beyer Leverkusen
Michael Ballack will relish the prospect of going against his former team of four years but first-choice keeper Rene Adler has been sidelined due to knee surgery, while Bastian Oczipka is recovering from a broken ankle. Tranquillo Barnetta will miss the clash after also undergoing an operation on his knee.

Chelsea are making their ninth consecutive appearance in the Champions League

Leverkusen have lost their last six Champions League encounters with English sides, including the last four by exactly the same scoreline (3-1)

Leverkusen have never kept a clean sheet in their 12 Champions League encounters with English sides
Email ThisBlogThis!Share to TwitterShare to FacebookShare to Pinterest