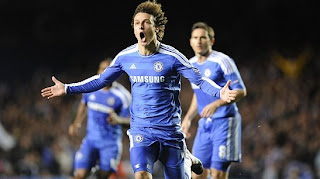 A brilliant goal from David Luiz and a late Juan Mata strike - both created by Fernando Torres - wrapped up a comfortable victory over Bayer Leverkusen in tonight's Group E opener. Andre Villas-Boas had insisted before the game that the Blues were not further than ever from realising Roman Abramovich's dream of European glory. The Portuguese's team selection said everything about his priorities in what is his biggest week since taking charge, with neither captain John Terry nor Frank Lampard in the starting XI ahead of Sunday's trip to Manchester United. On another day, Torres, who was excellent this evening, could have netted three times in the first half. Things looked frustrating for the Blues until a moment of inspiration from marauding defender Luiz midway through the second half before Torres unselfishly set up Mata to seal the victory late on.

Torres was bought to help win the Champions League, and would have been licking his lips when Sturridge swung in a second-minute cross which he hooked narrowly over in what proved a frantic opening. Torres was booked for the type of challenge on Leverkusen centre-back and captain Rolfes that often gets punished in Europe. Minutes later, both sides saw goals controversially disallowed; Omer Toprak's header from a corner ruled out for pushing and Torres' flick denied by an offside flag against Raul Meireles, who tried to backheel the ball home. An impressive Daniel Sturridge showed his team-mate the way by almost catching out Bernd Leno with rasping near-post drive, nearly beating the goalkeeper to Jose Bosingwa's cross, teasing Gonzalo Castro into a booking and driving a long-range blast just past the upright. Mata also shone once again, his free-kick on the stroke of half-time nodded straight at Leno by Branislav Ivanovic. 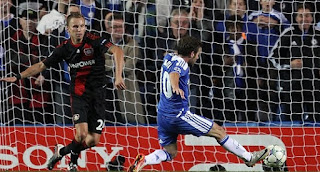 Into the second half and Michael Ballack might have scored were it not for Petr Cech to race off his line to block the former Chelsea star's shot. Torres also nodded straight at Leno, while Luiz was booked for hauling back Schurrle, who poked straight at Cech after being played in by Stefan Kiessling. But the save of the night came from Leno, who brilliantly turned Sturridge's first-time finish from Ashley Cole's cross onto the post. Villas-Boas then raised eyebrows by taking off Sturridge and Meireles for Lampard and Nicolas Anelka, while Leverkusen responded by throwing on Renato Augusto for Ballack. Just moments after the German side had taken off the former Blues man, Luiz broke the deadlock, starting the move with a barnstorming run into Leverkusen territory, before receiving the ball on the edge of the penalty area and firing a low shot past Bernd Leno. Luiz, who earlier hurt himself making a tackle, was withdrawn to a standing ovation, with Alex coming on before Anelka was denied what looked a perfectly legitimate headed goal by an offside flag. Chelsea endured a nervy finish before finally exploiting the space in behind when Torres squared for Mata to slide home.