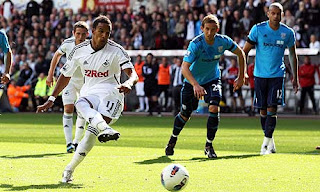 Swansea's Scott Sinclair says he is looking forward the "the best game of the season", as he heads back to Chelsea with his eyes on three points. The winger left Stamford Bridge in 2010 having failed to establish himself in the first team after joining as a 16 year-old, and says he is "excited" at the prospect of this weekend's Premier League match. "That's one team I'm looking forward to going back and seeing some old friends. It's going to be a great game," he said. Sinclair scored two penalties in a memorable hat-trick last May when Swansea beat Reading 4-2 in the play-off final to claim a Premier League place. The 22-year-old showed the same composure at the Liberty Stadium on Saturday to beat Baggies goalkeeper Ben Foster from 12 yards to score Swansea's first Premier League goal.