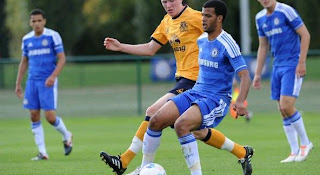 Chelsea's reserves left it late to secure a point against Everton this afternoon. They came from behind three times and maintained their unbeaten start to the campaign with goals from Billy Clifford and two late headers from Todd Kane. Everton took the lead with an early header, but Clifford levelled the game with a deflected shot before half time. The visitors went in front once more just in to the second half but Kane rose well in the closing stages to draw the Blues level, only to then see the ball ricochet off him at the other end to put Everton ahead yet again. Into injury time it looked as though Everton had won all three points, only for Clifford to clip the ball into the penalty area and Kane to run on and nod into the empty net after the Everton goalkeeper had committed himself.