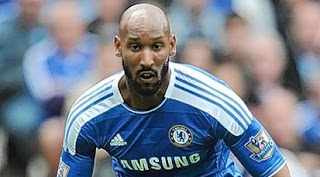 It looks likely that striker Nicolas Anelka will end his playing days in the US, with several of the country's top teams in the hunt for his signature. Both NY Red Bulls and LA Galaxy are said to be chasing the forward, who is now in the final year of his contract at Stamford Bridge. The striker is finding it tough to cement a place, with Andre Villas-Boas choosing to rotate him with fellow attackers Fernando Torres, Didier Drogba, Daniel Sturridge and Romelu Lukaku. Media speculation suggests this will spell the end of Anelka's time in west London and the States is his most likely destination as he looks to bring the curtain down on an illustrious career. Earlier this week, Anelka played down speculation that he has already decided to leave Chelsea, claiming he is very happy at the club but does not yet know what will happen in the winter transfer window or at the end of the current campaign.
Email ThisBlogThis!Share to TwitterShare to FacebookShare to Pinterest