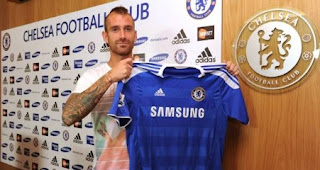 Raul Meireles says he had no desire to leave Liverpool during the summer and only handed in a transfer request because Chelsea made their move. Meireles, 28, joined Liverpool last summer from Porto and enjoyed a successful first year at Anfield, but there were reports throughout the summer that he could be sold. Juventus and Inter Milan were both said to have targeted the player, but Meireles says he was not interested in a transfer until former Porto boss Andre Villas-Boas expressed his interest. He told chelseafc.com, "I made the right choice last year to come to England and to come to Liverpool. This year was different because I knew that I didn't want to leave Liverpool. I felt that the new owners didn't want to sell me but, when I knew that Chelsea and Andre wanted me, it convinced me."

Meireles is also pleased to link up with a strong Portuguese-speaking contingent at Stamford Bridge. "I have a lot of friends here, Portuguese players that I know from Porto and the national team, and Jose Bosingwa helped me a lot in these first days," he said. "I know that Chelsea is a great club, one of the best clubs in the world, and it is not too difficult to convince me to come." With a wide range of midfielders now at Villas-Boas' disposal, his first-choice line-up remains to be seen, but Meireles insists he will take on any role the coach requires. "I like to play in midfield but for me it is more important that I play and I help the team so if the coach wants to put me in another place, I want to do my job and do my job well."