Meireles announced at the eleventh hour 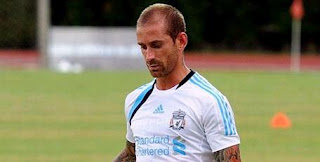 Chelsea completed the last-gasp £12m signing of Liverpool's Raul Meireles on a four-year deal - a story that first surfaced here one month ago. Chelsea switched targets after a final bid for Luka Modric of £30m plus Brazilian defender Alex was turned down flat by Tottenham chairman Daniel Levy. £7m was initially offered to Liverpool - plus Yossi Benayoun - for but the offer switched to a straight cash deal when the Israeli was loaned out to rivals Arsenal. Meireles, frustrated at dropping down the Anfield pecking order after the summer arrivals of Jordan Henderson, Charlie Adam and Stewart Downing, then made a formal transfer request. With the transfer deadline nearing, the two clubs agreed the deal, reuniting Meireles with the manager who sold him just 12 months ago.
Email ThisBlogThis!Share to TwitterShare to FacebookShare to Pinterest