Lukaku and McEachran could go out on loan 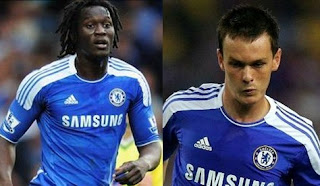 Josh McEachran and Romelu Lukaku will be allowed to leave on loan if they do not play enough games in the first half of the season. Andre Villas-Boas believes the pair are key figures in his future plans, but worries they could be hampered by not getting enough games. Villas-Boas will allow the 18-year-olds to join Premier League clubs in the new year if he can’t give them enough opportunities before then, with Wigan already having a loan bid for McEachran rejected. Plans for Stoke to take Lukaku were prevented by Premier League rules preventing a player from joining two teams in the same transfer window. A number of Championship clubs have made inquiries to take the pair when the Football League loan window opens tomorrow, however Chelsea want them to gain top-flight experience. The pair are expected to be on the bench for Saturday’s trip to Sunderland.
Email ThisBlogThis!Share to TwitterShare to FacebookShare to Pinterest