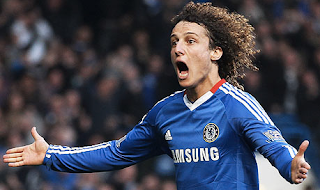 Brazilian defender David Luiz cannot wait to pull on a Chelsea shirt again and end the frustration of watching from the sidelines. Luiz has yet to play a competitive game for Andre Villas-Boas due to a thigh injury. But he is set to start for Brazil against Ghana at Craven Cottage on Monday after returning to full training. Luiz, 24, plans to use the game to show Villas-Boas he is fit to face Sunderland when the Premier League resumes after the international break. "I didn't want to get injured, but these things happen in football," he said. "I'm missing playing in the Premier League so much and I hope I get to play again very soon. It's very frustrating when you're hurt because you want to be out there. Everybody wants to work, especially when you love your job." Chelsea are two points adrift of Manchester United after three games. But Luiz insists the Blues are determined to finish above the Red Devils to reclaim the title. He added: "Chelsea are a great team and always enter every competition to win. I'm sure we're going to do our very best to win the championship back from Manchester United."