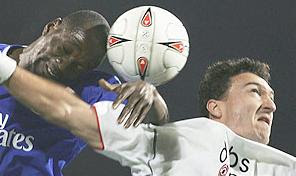 A Frank Lampard goal three minutes from time was enough to send Chelsea into the Carling Cup semi-final  when these two sides last met in this competition, at Craven Cottage in November 2004. Lampard, a second half substitute, forced Edwin Van der Saar into a horrendous error, when he allowed the midfielder's effort from distance to bounce off his body and into the goal. Earlier in the game, Fulham had cancelled out Damien Duff's opener through Brian McBride's effort; but it was Jose Mourinho's Chelsea side that progressed. Two of the three goal scorers may feature tomorrow in some capacity...

Chelsea
Didier Drogba returns but Chelsea will otherwise flood their team with youngsters for the Carling Cup third-round tie against Fulham. Drogba has recovered from the head injury that has sidelined him for more than three weeks and may feature alongside 18-year-old Romelu Lukaku. However, it’s likely that Andre Villas-Boas will afford Fernando Torres the opportunity to start and get straight back on the goalscoring wagon after Sunday's display at Old Trafford. Elsewhere, Josh McEachran, Oriol Romeu, Ryan Bertrand - and possibly Ross Turnbull - are set to start.

Fulham
Fulham have a doubt over Algerian defender Rafik Halliche because of illness. Captain Danny Murphy and centre-back Brede Hangeland are among those likely to be rested following what has been a hectic start to the new season and defender Bjorn Helge Riise (groin) remains sidelined. Martin Jol may give new signing Bryan Ruiz a chance to prove himself after a lacklustre start to life in London.
Email ThisBlogThis!Share to TwitterShare to FacebookShare to Pinterest